This book is propelled by its characters. And such characters! A widow/single mom with bull-dozing determination insists on proving her capabilities. A fastidious widower harboring a guilt-filled secret refuses to revisit the vulnerable position in which affection places him. An adoring mother whose meddling ways instigate complicated interaction. A talkative nine-year-old with the sincerity and wonder of one much younger, but the intellect and daring of one much older.

A Bride Opens Shop follows Elenora Watkins to the rather new California town of El Dorado where she finds disappointment, unwarranted suspicion, and discrimination. Rather than allowing the attitudes to defeat her, Elenora used them to strengthen her resolve to prove to the townspeople, and maybe more to herself, that she has the capabilities to accomplish her goal.

What I loved most about this book was the consistency of the characters. Not that they remain the same, both main characters complete a satisfying arc. But as they adjust and redirect, they stayed true to their personalities. For example, only a desperate emergency would persuade the always well-dressed Miles Rutledge to disregard his appearance.

In fact, Elenora stays so true to her character, she builds up regrets about it. I must say, during a special contest, I had hopes that she would step down rather than risk injury to someone else, but true to form, she can’t seem to shrink from a challenge.

These people seemed so real in their reactions, they make the reading easy, the changes believable, and the story an absolute gold mine, worthy of the name El Dorado! Five hearts! ♥♥♥♥♥ 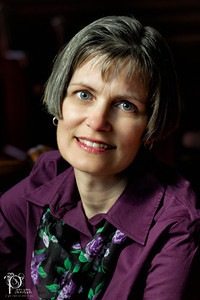 From her bio: Keli Gwyn writes stories that transport readers to the 1800s, where she brings historic towns to life, peoples them with colorful characters, and adds a hint of humor. A California native, she lives in the Gold Rush-era town of Placerville at the foot of the majestic Sierra Nevada Mountains. Her debut novel, A Bride Opens Shop in El Dorado, California, set in the heart of the Gold Country where she lives is currently available.

When Keli’s fingers aren’t hovering over the keyboard of her newfangled laptop, she enjoys strolling past stately Victorian houses in her historic town, burying her nose in reference books as she unearths interesting facts to include in her stories, and interacting with other romance readers. Her favorite places to visit are her fictional worlds, the Coach factory outlet store, and Taco Bell.

The story is a sweet romance with hints of humor that readers of Margaret Brownley, Erica Vetsch, or Karen Witemeyer’s work might enjoy.

4 thoughts on “Historical Romance at its Best!”