A couple of months ago, I announced to y’all the top 10 books that I wanted most to read this year. Almost all of them are romantic suspense or mystery novels with a Christian focus. A few weeks ago, I chose one at random to read, I can now add another check mark to my list. 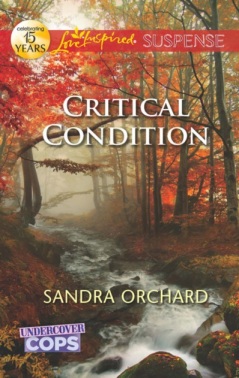 The book I chose, Critical Condition by Sandra Orchard is published by Love Inspired Suspense. Critical Condition proved delightful. I struggled right along with Tara, trying to protect her daughter and shield her own heart. And I walked along with Zach, determined to steel his feelings against the two females who wiggled their way into his life.

While I did figure out the mystery part of the story along with the motives behind it early, the true tell of a book (for me, anyway) was how it made me feel. And Critical Condition ignited emotions. Tears fell when the weary heart surrendered to the Father. And again when the emotional pain of a character overwhelmed. Though I don’t think I laughed anywhere, the ending proved satisfying.

I give it an enthusiastic four and a half stars. The only issue I had was one section where a key component disappeared. A minor and brief situation that seemed … messy, I guess is the best word. All in all, I thoroughly enjoyed the story and look forward to experiencing another of Sandra Orchard’s books soon.

Here is the information from the back cover:

There’s a murderer in the hospital, and nurse Tara Peterson is determined to prove it. With mysterious deaths in the cancer ward, anyone could be next. But no one wants to believe her…except undercover agent Zach Davis. The murderer wants Tara’s suspicions silenced, permanently. To protect Tara, Zach lets her in on his secret, and unwittingly into his heart. Tara and her three-year-old daughter are like the family he lost years before. Zach will risk everything to keep them safe, no matter the cost.

Your turn: What’s the last fiction book you read? And don’t forget to visit on Wednesday to meet Sandra!