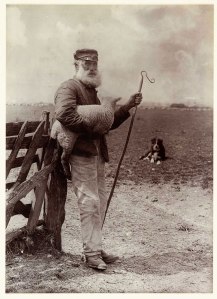 Last week we started a study about God as our Jehovah Rohi, our Shepherd, and all the images that name conjured. But think about it. Shepherds were lower class citizens, dirty from working outside night and day around smelly sheep. Comparing God to one would be much like comparing our favorite celebrity to a road worker, garbage man, or janitor. (Jobs mentioned are just to make a point – not a slight because I know and respect people who work in all three of these jobs and others similar.)

So why would David (who was a shepherd himself) taken comfort in God being his Shepherd? The answer to this lies in what David knew about being a shepherd. It wasn’t just manual labor, a smelly job. The shepherd cared for his sheep. In Ezekiel 34:11-12, God says that He will search for His sheep and seek them out. And when they are scattered, He will find them in the dark, scary places where they’ve gone.

David himself had killed a lion and a bear as he protected his sheep, throwing himself into danger in order to save the ones he protected. What a picture that is!

And what about the story that the prophet Nathan used to convict David of his greed. The story of the little lamb and how the shepherd loved it. The ewe was like a daughter to him.

But I think the best explanation of a shepherd and why the title makes a good one for our Father lies in Psalm 23 itself. Look back at it and see first what the Shepherd does for us and then how He is described. (Psalms 23:1) The LORD is my shepherd; I shall not want. (I don’t need anything!)

Not only does the Shepherd see to my needs, He has other describers. Everything that the shepherd is to the sheep, Jehovah-Rohi is to His people.

So this name for God, even though the job itself wasn’t highly regarded, was a perfect fit for the One who cares for us so. And as to the honor given the Shepherd; coming from the sheep’s perspective, there is no One greater than He.

Your Turn: What does comparing God with a shepherd conjure in your mind?

4 thoughts on “More on Jehovah Rohi”