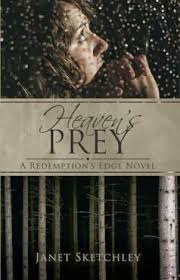 I’m so flattered that Janet Sketchley asked me to review her debut book, Heaven’s Prey. I was a little reticent as I scanned the blurb, but the premise made my heart start pounding. See if you have the same reaction:

Despite her husband’s objections, 40-something Ruth Warner finds healing through prayer for Harry Silver, the racing star turned serial killer who brutally raped and murdered her niece. When a kidnapping-gone-wrong pegs her as his next victim, Harry claims that by destroying the one person who’d pray for him, he proves God can’t or won’t look after His own. Can Ruth’s faith sustain her to the end whatever the cost?

From page one this story lived up to it’s premise. Wow!

The characters – oh you know I’m going to discuss characters – were my next door neighbors. The villain could have been any number of my favorite (or least favored) NASCAR drivers. The story opens with the main character, Ruth, headed for a prayer meeting. She’d committed to pray for the soul of the man who raped and killed her precious niece whom she raised like a daughter. That right there is enough to make me stop reading.

What mother wouldn’t feel the same way? Hey, I’ve got precious kids and that just cuts a little too close. And yet, I’d like to think that, faced with pain like hers, I’d be willing to pray for the pain-giver. And so I read on. As the story unfolded and I heard Ruth’s internal prayers, I could hardly make myself continue. I wanted so much for the faithfulness of God to come through, but the situations seemed hopeless. In fact, I made a note on Goodreads: I can’t put this book down because it’s so intense, but I have to put this book down … because it’s so intense!

Time and again, I had to stop and wipe my eyes. A normal reaction when I’m reading about the power of God and the presence of His redemption. Janet Sketchley has an amazing talent for drawing readers into the story. And once pulled in, it was easy to stay. I will say that there are a number of lengthy flashbacks through the middle of the story. They didn’t bother me. On the contrary, they revealed insight, not only to the villain, but to the spiritual agenda as well. However, if flashbacks get on your nerves, you won’t like this one.

And with the case of Heaven’s Prey, as in last week’s book, Healer of Carthage by Lynne Gentry, my daughters heard about the story, but they won’t read this one. The subject matter alone takes care of that decision, and some of the scenes are violent. But this story does keep with the genre of Christian Fiction. Despite the premise, the author keeps things clean – a remarkable feat, considering. I can recommend it to Suspense lovers without qualm. Oh my gosh, you’ll love it!

Your Turn: When has a celebrity you respected surprised you?