Last week we started the study of the name Jehovah Sabaoth. Seems I’m not the only person who thought that meant Lord of the Sabbath. But it doesn’t. Doesn’t even come close to that title.

Check back at the first part of this investigation. This name came up when David fought against Goliath. The big guy hurled insults at the Israel army. But David hollered back (or he woulda hollered iffen he’d abeen from Texas). “You come to me with a sword, a spear, and a javelin, but I come to you in the name of the LORD of hosts, the God of the armies of Israel, whom you have taunted.” 1 Samuel 17:45

This name denotes His universal sovereignty over every army, both spiritual and earthly. The Lord of Hosts is the king of all heaven and earth. (Blue Letter Bible.org) 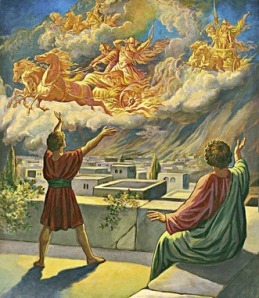 Makes me think of the situation with Elisha and his servant. In 2 Kings 6:17 when Elisha’s servant observed the Aramean army surrounding their city, he panicked. “Then Elisha prayed and said, ‘O LORD, I pray, open his eyes that he may see.’ And the LORD opened the servant’s eyes and he saw; and behold, the mountain was full of horses and chariots of fire all around Elisha.” Those are the hosts. And they filled the mountains that surrounded the city. Super cool.

The Lord of Hosts is a comforting name for His followers, His children. Yet it can be terrifying to be on the opposite side of Him. In the case of Israel during the time of the prophet Zechariah, God isn’t happy and he drops this name of His several times as he warns His people.

By the end of the book, the Lord has explained what all will happen to the people, mostly bad, but how He will raise them up after their difficulty. Something no one else can do. In Zechariah 4:6, He ends his description with the text (one of my favorites!)  “‘Not by might nor by power, but by My Spirit,’ says the LORD of hosts.” The New Living Translation says “The Lord of Heaven’s Armies.” And Martin Luther echoes the intent of the scripture with his words from the hymn “A Mighty Fortress is Our God.”

Did we in our own strength confide,
Our striving would be losing;
Were not the right Man on our side,
The Man of God’s own choosing;
Dost ask who that may be?
Christ Jesus, it is He;
Lord Sabaoth, His name,
From age to age the same,
And He must win the battle.

This name of God fits right in with Jehovah Nissi, the Lord is My Banner (a military term.) And Moses calls God, The LORD is a Warrior (Exodus 15:3) after he covers the Egyptian army with the Red Sea. While most Christians prefer to focus on the love of the Lord and His kindness and mercy (which are all important!) to downplay this essential aspect of His character is to remove part of His power and eliminate the truth of Who He is!

God is all of these names that we’ve studied, and more. Somehow the Lord of Hosts interweaves with the Lord Who Provides (Jehovah Jireh) and the God of Peace (Jehovah Shalom). No wonder we can only fathom Him a little at a time!

Your Turn: What name that we’ve studied is your favorite so far?

2 thoughts on “More on Jehovah Sabaoth”