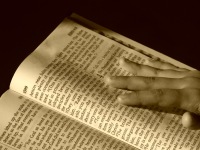 Our great God has numerous names, especially in the Old Testament. Almost for every event in the lives of His people, He revealed an aspect of His character with a new name. But this one is a little different

In Ezekiel (48:35), the only place were this name of God is mentioned, the prophet is explaining how the evil of the people had pushed God out of their lives. While His love for them never wavered, He removed Himself from their city of Jerusalem and from the temple. Ezekiel explained that all was not lost. Though God removed His hand of protection on the city and it would therefore be destroyed by encroaching kingdoms, He would return to the city. It would be rebuilt.

And the CITY would be called Jehovah Shammah, God is There.

This did indeed happen, when God’s Son came to this earth. I believe it has prophetic meaning for us as well, when Jesus Christ returns to the New Jerusalem.

I read several studies on this name and many of them focused on the literal meaning. God is there. In Jerusalem. But this was a book of prophecy, and Ezekiel has BRILLIANT 2nd-coming prophecy. In so many cases, prophecy has a near-future meaning and a far-future meaning. But the words are also applicable to believers where they are.

I think the same is in this name of God. See, Jerusalem is not the Holy City for believers. The temple there isn’t God’s only dwelling place anymore. That’s what Pentecost was all about. Scripture describes that the Spirit of God resides inside believers. Just like the Spirit rested on the Tabernacle in the days of Moses and in the Holy of Holies in the days of Solomon.

God is there. Ezekiel pointed to the city of Jerusalem and the relatively near future of about 400 years. We can point to our own hearts, for Jesus promised, “I will not leave you comfortless. I will come to you.” John 14:18.

Something else we can point to are the times in our future when we will need Him. A tragedy, a desperation, an abandonment. He’s already in that moment of despair and will comfort us then as he promised. For He is OUR Jehovah Shammah.

Your Turn: When has our God “been there” for you?