For the last couple of months, I’ve been working with a group of exceedingly talented people. I so enjoy collaborating with them to create stories. We have three as of today. All of them single stories of inspiration and romance, and all of them written by multiple authors.

If you’ve ever tried to decide on what’s for dinner with the input of a couple of family members, I think you’ll be able to grasp the challenge of this type of writing.

And yet, with each book, I’ve grown in my appreciation for the career to which the Lord has led me. I’ve learned so much about writing and enjoyed the process and the folks involved! I’m so grateful to be connected to Write Integrity Press and the faith-focused people who lead that company.

And I’m grateful for the inspiration and creativity of my fellow authors in our newest work. Love Boat Bachelor began as a sequel to A Dozen Apologies from last Valentine Day. Then the talented Jerusha Agen put form to the plan. From there, she and the other authors, Theresa Anderson, Julie Arduini, Joan Deneve, Fay Lamb, Elizabeth Noyes, Betty Owens and I, sculpted the story that will begin it’s debut on Monday.

This is such a fun book. I can’t wait to share it with you. And I’m doubly excited because I can share it with you for free, at least for a while. Don’t miss this opportunity! For the next week and a half, Love Boat Bachelor will be shared, one chapter per week day, at WriteIntegrity.com. Then, we need the help of the readers to vote for their favorite heroine. The gal who wins gets the man and her final chapter will be in the 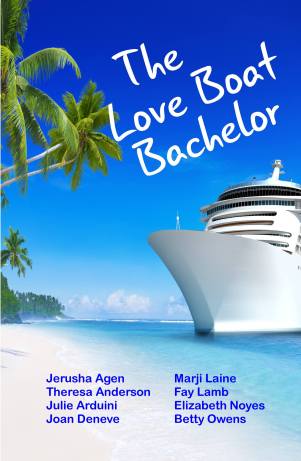 Romance is a joke.
After the love of Brent Teague’s life came back into his world only to marry someone else, Brent is through with women. He might be through with being a pastor, too.
Brent was so sure that God brought Mara Adkins home to him so they could marry and live happily ever after. Six months after her wedding to another man, that theory is obviously a dud. If Brent could be so wrong about that, who’s to say he’s not mistaken about God calling him to pastoral ministry?
Tired of watching Brent flounder for direction, Brent’s feisty older sister boots him out of Spartanburg and onto a cruise ship. Brent’s old college buddy manages the ship’s staff, and he’s thrilled to finagle Brent into the role of chaplain for the two-week cruise.
As the ship sets sail, Brent starts to relax. Maybe a cruise wasn’t such a bad idea after all. But there’s just one little thing no one told him. He’s not on any ordinary cruise. He’s on The Love Boat.
What’s a sworn bachelor to do on a Caribbean cruise full of romance and love? He’ll either have to jump ship or embrace the unforgettable romantic comedy headed his way.

So while Brent is being thrust into a romance filled ship over at the Write Integrity Press blog, here on Faith Driven Fiction, I have something special. Let’s say a hacker accessed the cruise line internet on which our hero traveled and somehow floated Brent’s ship–board communications to me. If that happened, I would be seriously selfish to hoard the fun facts from his trip. So, a series of emails that he sent to his sister during his trip will appear here at Faith-Driven Fiction. Hope the story and the letters brighten your day, give you a chuckle, and warm your heart!

YOUR TURN: Lot’s to look forward to over the new couple of weeks. How about you? What are you excited about? By all means share! That just makes the enthusiasm grow!

Oh! And stop by and see me today at Lena Nelson Dooley’s blog!