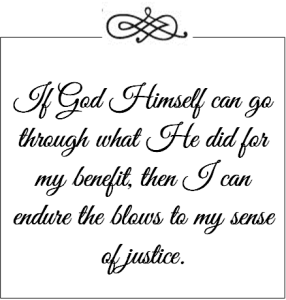 We’ve been going through the book Thirty Days of Devotion in an effort to establish a strong daily quiet time and concentration in our walk with God. Whether you can join us fully or stop by on occasion, do share your thoughts on the topics! We’d love for you to join us!

Today’s issue is a touchy one. I’ve been teaching my girls that they have a stand they will need to take. But they have to choose their stand.

These days it seems there are so many things about which to get angry. So many examples of our freedoms being removed or threatened. The Christian way of life is not only called into question, it’s publicly disdained and misrepresented.

And the issues – too numerous to mention from harassment from being in Christ, to public villainy for being outspoken. Not to mention the outright martyrdom of worldwide brothers and sisters. Add to that the tax persecution of Christian groups, redefining marriage, threats to destroy the nuclear family, abortion, etc.

It’s hard not to let ourselves get up in arms.

Jesus said the world would hate us because of Him. He was right.

Can I confess right here to rarely watching the news? I don’t trust the media – well, beyond meteorologists – and the stories end up making me feel either angry or frustrated. Neither of those are emotions I should indulge in. So I just don’t go there.

And believe me, I’ve been fussed at for “sticking my head in the sand.”

I know that we are to stand. (Ephesians 6:13) But at the same time, our “righteous indignation” doesn’t cut it. We’re not supposed to stay angry. Not about anything. Stand, yes. Remain in outrage, no. Not according to Ephesians 4:26. And James 1:20 said that my anger doesn’t even get to the point of true righteousness.

My advice to my girls is to pray about when to stand and when to let God take care of things. And if the answer IS to stand, do so without rage. It’s not a righteous fire that builds wrath. The righteous fire is the zeal for the Lord and His kingdom to come.

Your turn: Like I said at the beginning of this post, this one is in a touchy area. Have you ever thought about the difference between standing for the Lord and taking a stand on the issues? Is it always the same thing?

Come back tomorrow when we’ll discuss another issue in the season of preparation, “What God Doesn’t Promise.” And by all means get a copy of Thirty Days of Devotion for yourself for only 99¢ at Amazon.com.