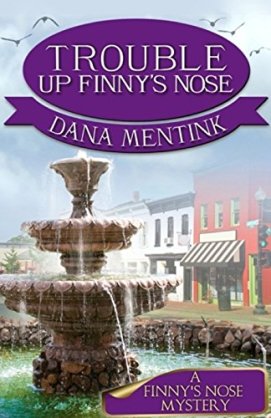 My daughter and I had the pleasure of listening to the first of her cozy series set in a quirky, small town on coast of northern California. Trouble Up Finny’s Nose had us in hysterics one moment and twisted in curiosity the next.

Normal and commonplace for the town of Finny would be considered rather ludicrous elsewhere. How often do you meet a fortune cookie writer, or visit with a seagull herder, or see a man upside down in a fountain? (The octogenarian paper “boy” remarked that he’d never seen anyone hold his breath that long.)

For Ruth, a recent widow, finding a dead guy in the central fountain of downtown Finny is only slightly more disturbing than the fact that her hairdresser left for Fiji before Ruth could make it to her weekly appointment.

Not that Ruth is an investigator by any means, but she does find herself in the wrong places at the perfect times to learn things she’s not supposed to know. However, she’s not in a position to figure out what’s really happening in her town before yet another person ends up dead. The next fatality could be hers.

Obviously I loved this book. Especially loved that I could listen to the fun story with my teenage daughter! No joke, that is such a blessing in an of itself! With Dana Mentink, and authors like her, I don’t have the least concern that their stories will have situations embarrassing to my daughter or that conversations or obscenities will make things awkward between us. On the contrary, this book opened up Biblical discussions between us as the characters worked through issues with their faith.

And these characters were extraordinary. I don’t know how the author peopled her town so well. Each character had a unique feel to them that makes their entrances and exits on the “stage” obvious. The meticulous art gallery owner, the amorous caterer, the self-absorbed artist, and a grieving detective are only a few of the brilliantly-crafted citizens of Finny. Then, there’s Ruth Budge, still struggling with the loss of her husband two years after his passing. She dutifully walks the flock of seagulls he left behind daily. Yes, she walks the poor injured things, and tends to them like pets.

Half-dozen ornery birds give way to effortless comedy. They aren’t the only sources of humor (out loud belly laughs!), but they certainly laid a good foundation of chuckles. And while the laughter was welcome, the twisted mystery engaged my brain and kept me guessing. I wasn’t surprised with all of the revelations, but I didn’t see the ending coming until it was upon me. Kudos to the author!

It’s been way too long since I enjoyed a great cozy mystery, but with more travels in my future and two more books in this series, it won’t be long before the next one!