I’m so excited! Yeah, the words of that song are running through my mind at the moment! Some GREAT things have been in the works for a while and they are all coming to a head TODAY! Woohoo!

Tonight’s topic is the variety of choices that today’s market gives to authors in regards to publishing. All of those options produce both challenges and benefits. And we’ll be analyzing those. I say “we” because I won’t be alone on this talk show. My guest is Dena Netherton, author of a creepy new thriller, HAVEN’S FLIGHT.

And that’s my second …

Yea! This book goes beyond suspense and involves a mad stalker and the natural challenges of the rugged Cascade wilderness. Here’s the short version: 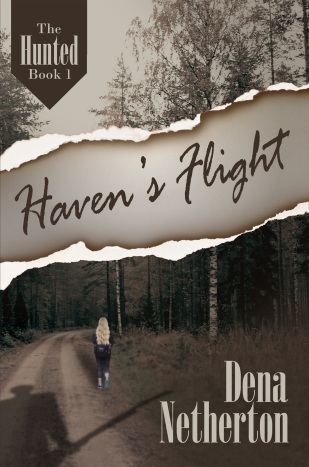 Haven enrolled in Life Ventures Therapy Camp in the Cascade Mountains to help her heal from horrible memories of her mother’s violent death at the hands of an armed robber. But now, a greater fear dogs her steps. In the mountains, the rustle of leaves or the snap of a twig could be nothing. Or it might signal the presence of the man who won’t stop following her. It seems like a cruel trick from God to throw Haven into another dangerous situation only a year after her mom’s murder.

He hides near her tent and listens to the girl talk with the counselor. Mostly she talks about her father. She’s unhappy, and he can’t stand to listen and do nothing about it. He needs to rescue her. He needs to make sure she doesn’t ever go back home to her father. His own father was the cause of his mother’s death. And Ruth’s. He can’t let that happen again. When the time is right, he’ll take her away to his hidden cabin where she’ll be safe. She’ll never be seen or heard from again. And he will feel peace for the first time in years.

Can one month of survival training equip a girl to face all that the rugged wilderness and a madman can dish out?

And then there’s my third

This one is on a more personal level. Spunky, one of my twins, started her new job this morning and yes, the dog picture does her justice! It’s a mirror image of her enthusiasm when I picked her up after her shift! So happy for her!

But I could use the prayers. For the next several weeks, until she gets her license, she’s got 5AM and 3AM shifts – guess who gets to chauffeur? #Just5MoreMinutes? #WayTooEarly!

YOUR TURN: What is turning on your excitement today???