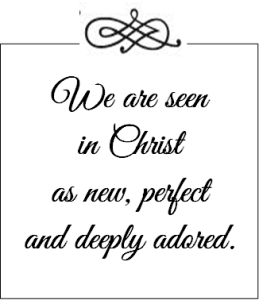 We made it! Everyday devotions for the entire month of September! This challenge certainly helped me. I know I missed my quiet time on one morning, but for the others, I enjoyed prayer and Bible study in addition to reading and discussing Thirty Days of Devotion with y’all.

I have found toward the end of the month that my normal Bible study hasn’t been enough. Most days, I’ve been doubling my study time and enjoying every moment of it. And that’s END_OF_DOCUMENT_TOKEN_TO_BE_REPLACED

We’ve spent the month of September in a challenge to spend time with the Lord everyday. In an effort to do that, we’ve been using the book, Thirty Days of Devotion. As we near the end, today’s entry is particularly important.

When you’re pressing for something, striving, once you finally achieve your goal, it can feel empty. If your mind is focused on the task, what others think, celebration, what you deserve, or any other distraction, you’re likely END_OF_DOCUMENT_TOKEN_TO_BE_REPLACED

We’re finishing up our final section in Thirty Days of Devotion and discussing priorities for the last time.

Today’s article still focuses on keeping our priorities in line with Christ. In particular, having the same attitude as He when He became obedient to death.

Despite the claims that END_OF_DOCUMENT_TOKEN_TO_BE_REPLACED

Yesterday’s article from Thirty Days of Devotion discussed the need to regularly refit our priorities. That is, we need to make sure that the things we’ve been doing and expect to continue still fit into the path the Lord has for us.

I can’t help but think about the example of the disciples. That’s such a clear illustration, from the book, I simply can’t better it. The Lord called them to follow Him. They immediately laid down their nets and physically walked after him.

Literally, they followed. They didn’t END_OF_DOCUMENT_TOKEN_TO_BE_REPLACED

This final season in Thirty Days of Devotion began a couple of days ago, but yesterday’s post really puts things into focus.

When the season of harvest begins, not only do the blessings start flowing, but the work kicks into high gear. But here’s the deal; the work doesn’t always remain the same.

What I mean is, just because END_OF_DOCUMENT_TOKEN_TO_BE_REPLACED

Throughout this devotional challenge, I can honestly say that I’ve been late a few times with my devotion, but I’ve had one, and usually a good Bible study with it, every day except one. No excuses. I coulda, shoulda, woulda stopped long enough to spend some time, beyond prayer, with the Lord.

Today marks the final week of my 30-day challenge as we move through the last section of Thirty Days of Devotion. All of the other seasons focus on END_OF_DOCUMENT_TOKEN_TO_BE_REPLACED

Today’s article in Thirty Days of Devotion isn’t always an easy one to swallow, but these waves of life will be around whether we want them or not.

Just like we are in a spiritual season, we have waves in our lives. Relationships, our identities, personalities, and responsibilities all change over time and we have to adjust to the ebb and flow of the waves.

NOTE: We have to adjust. The waves aren’t going to adjust to us.

The picture here really connects with me. The deep recesses of my nature change so slowly that I scarcely notice it. Though over time, I can look back and see where I was as compared to where I am. For the the good or bad of it.

The hats I wear and responsibilities I enjoy can change much more frequently. The stress from their changes affects me and causes me to redirect my efforts, but their effect gets absorbed after a short time.

The circumstances of daily can certainly batter me. Or they can give me the ride of my life, depending on my attitude. But the effect of these waves doesn’t last unless a storm hits.

And it’s those storms, the tumult, that brings the deep waves crashing onto the shore. Storms change everything. The shoreline, the wave motion. They make those jarring alterations that set new life courses complete with endless adaptations. (Or at least they seem endless.)

But they also offer new beginnings. New opportunities to see what we’re made of, what we’re capable of. And how God can use even the most devastating of storms to say, “Yeah, I know. I’ve been there,” in hopes of helping some other struggling sailor.

Your Turn: How have your storms directly affected others in a positive way? How have they made a positive impact on your life?

Tomorrow marks the beginning of our final season! Wow! We’re almost there! Come back and see what this last season in Thirty Days of Devotion has to offer!

After the last few days of focusing on the passions that the Lord has for us, it seems a good time to remember that being His handmaiden doesn’t imply constant busyness.

It especially doesn’t mean that I don’t spend time with Him in prayer or reading His Word.

That’s what this 30-day challenge has all been about. I decided that I needed a strong habit of scripture study and prayer time. That begins with a simple devotion. If I’m so stressed out that I can’t be still for a few minutes before the Lord, then I’m way too busy.

That’s when the layers of what I must do separate from what I need to do, should do, and want to do.

And let me tell you, spending some time before the King every day is a must do, not a need to do.

That concept had to really take root. Before, when I would attempt to get up early for prayer and Bible study, I’d think “I should do that.” But that should-thinking is usually reserved for the tasks that I’ll do when I find time.

Guess what. Time’s not something we can find. I just is. What we have to find is a way to live within it’s limitations. Took me almost fifty years to figure that out.

But now I realize that I must put those things that are priorities in my life, like my relationship with the Lord, into first position. Those are the must-doos that will get done, right along with taking my girls to their next volleyball game, getting gas for my car and groceries for my family, and letting my dog out.

It must be that important in order to become the life-style habit that I want to develop.

Your turn: Are there any items in your should-do or need-to-do categories that you need to move to your must-do pile? Are there things mired in the must-do that aren’t really must-doos?

I hope you’ll come back tomorrow when we shift gears a little and discuss the “Waves of Life” article from Thirty Days of Devotion. 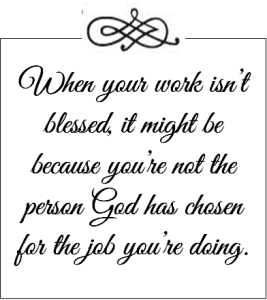 Today’s section from Thirty Days of Devotion is the final one about passions: identifying them, using them, and deciphering between what is God-given and what is corrupted either from personal agendas or unholy desires.

In particular, this article piggy-backs the one about saying “no” to opportunities and requests to which God is not leading. I find saying no so much more difficult than saying yes!

The story shared in today’s entry in Thirty Days of Devotion is an example of a time when I didn’t say “no.” And from the beginning, my work was a struggle. So unlike the God-directed ministries with which I’d been working. (Not that this new project wasn’t God-directed. I wasn’t being directed there by the Lord.)

I don’t regret my mistake, though. I learned so much from it. Probably my biggest lesson was what life looks like when I don’t follow well.

I’m so glad I had that lesson with that particular group of ladies. So full of grace and urging me to follow the Lord’s leading! And I’m pleased that they didn’t get a whiff of the frustration I’d been feeling until we started planning for the next year. But still, I can’t help but wonder at how things would have been so much smoother had the right person been in the position.

Saying “yes” to the wrong project – even a ministry – can be such a trap. Whether the pressure comes from misplaced guilt, friends, or personal agendas, if the leading doesn’t come from the Lord, the answer needs to be “no.”

Your Turn: I know not all of you reading deal with this type of issue. But everyone has a path that they are following. What are you doing at this point in your life that you can tell the Lord is blessing? Maybe educating your kids or making meals for neighbors? Doesn’t have to be a long term project. Maybe God’s been tapping you on the shoulder to try something new?

Tomorrow, we’ll be refocusing on our plan here. Just another week or so to go! Join us for the chat on “I Think I Can, I Think I Can” from Thirty Days of Devotion.

I love the song for today’s section! This song was one of my solos when I sang with a group in college. The sincerity of the message still affects me!